What size battery charger do I need?

When buying a 12V charger, look at its ratings and charging cycles to determine what size battery charger would do the job best.

All batteries, whether for a torch or recreational vehicle (RV), look to be fairly inert devices. As indeed they are when not connected to any load. However, when a battery is being used to power a device, they become something of a chemical powerhouse, pardon the pun.

In most RVs a typical charging voltage for a 12V battery varies between 12.9V and 14.4V. Whilst a constant voltage and current will charge a battery quickly, something usually delivered by cheap battery chargers, it’s considerably better if the charging characteristic is matched to the battery.

For instance in the case of lead acid deep cycle, gel cell or AGM batteries, they all require a cycle which in a base form consists of three stages – bulk, absorption and float. Bulk is the first stage in the rated current of the charger is delivered to the battery at a constant voltage. The absorption stage delivers current at slowly reducing voltage whilst the float or “trickle” charge keeps a fully charged battery from discharging – something that happens whether a battery is being used or not.

Lithium (LiFePO4) batteries operate a little differently, in that there is a constant current stage and then a constant voltage stage. Undoubtedly the most attractive feature of Lithium batteries is that they charge considerably faster than any of the lead acid variants.

BMPRO has a range of different size battery chargers to suit all battery ratings –  BatteryCharge4, BatteryCharge7.5, BatteryCharge15 and BatteryCharge25. All are multi-stage and all will actually charge up a typical 100Ah deep cycle RV battery.

However, the BatteryCharge4, which has a maximum output of 4.0A, will take some considerable time to fully charge a 100Ah battery, even one that is say 50 percent discharged. Ignoring any efficiency factors and any load on the battery, it would be well over 12 hours. Which is why we recommend for most RV travellers either the 15Amp or 25Amp chargers for a 100Ah battery.

How long does it take a charger to fully charge my battery?

In theory it would be easy to say that a battery charger delivering 25A should fully charge a 100Ah deep cycle battery in four hours.  However, that does not take into account factors like how deeply discharged the battery actually is, what the load factor is and what condition the battery is in. If contemplating changing a battery or charger rating or both, then it’s best to get expert advice based on the anticipated battery usage. 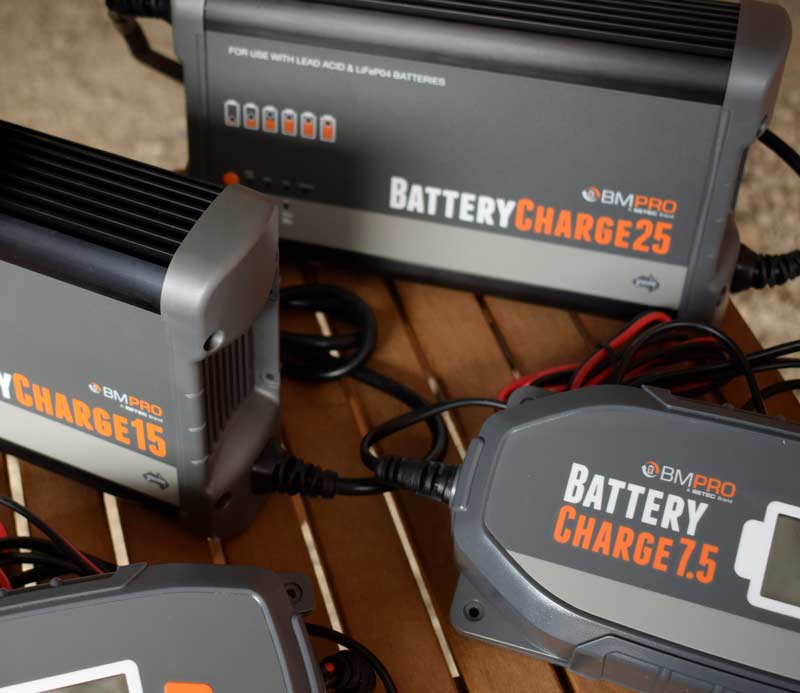