POWER TO THE PEOPLE.

A decade or so ago, battery-powered systems in many recreational vehicles were very unsophisticated. Many caravans did not have any sort of on board battery at all, relying on a 12V ‘hot wire’ from the tow vehicle and whilst motorhomes had a ‘house’ battery, the charging system was probably quite basic, relying on either the vehicle alternator or a 240V mains charger.

Although battery development was certainly happening, there were just two main types – a starter for the vehicle and a deep cycle for the ‘house’ load. Control systems were also quite basic and if the lights were left on too long or the fridge ran for a lengthy period on 12V, then the result was frequently a flat battery.

Since then of course, there has been any number of technological developments in not only batteries but also charging systems, with batteries being able to be charged from multiple sources, sometimes simultaneously. Battery loads have changed, become much more diverse and in some cases intolerant of excessive voltage fluctuations.

Battery technology has evolved considerably too. Deep cycle wet cells, either sealed or unsealed, were used for many years but then Absorbed Glass Mat (AGM) and Gel Cell batteries became much more common. In more recent times both Lead Crystal and high capacity Lithium batteries have been released onto the marketplace.

Each type of battery has different (and in some cases better) voltage and current supply characteristics and conversely each has different charging requirements. Whilst this might not seem important in the overall scheme of things, batteries used wrongly or charged inefficiently will almost certainly have a shorter than expected life. An example of this occurred mostly in motorhomes. Whilst the vehicle alternator may well have had the current capacity for charging both the starter and house battery, the lack of a ‘multi stage’ characteristic as in a ‘smart charger’ often meant that the house battery was never fully charged.

Consequently, in a contemporary motorhome for the 12V power supplies we could have a vehicle starter battery and a lithium house battery. On the load side, there could be a fridge, TV or three, lighting, power awning, slide-out, water pump(s), electric steps, portable device charger and inverter. On the generating side, there could be a 240V mains charger, vehicle alternator, solar panels and a separate generator. Now it would certainly be possible just to cable all those items up into a common 12V system but would it be an efficient one? A simple way of thinking about this is to consider a starter battery and a deep cell battery. Each can be used in the alternative role but neither would end up giving an efficient and economic service. It’s exactly the same for an overall system, it has to be set up for maximum efficient use of all components.

One device for all

Manufacturers like Setec have considered the problem of complex electrical circuits. Whilst it would be possible to set up a system of battery monitors, charging, fused circuits, voltage measurements and device/appliance control using discrete devices, it would be much easier, particularly for the end user if all those functions were controlled by the one device.

All voltages and current flows can easily be measured and checked against each other.  In order to maximise the efficient charging of all system batteries, Setec has done extensive testing of all battery types, including the newer Lithium and Lead Crystal designs. That way all battery characteristics can be loaded into the IBMS software and optimum charging conditions can be maintained at all times.  An obvious benefit of this is that battery life is prolonged like for instance batteries are not being discharged to unacceptable levels.

When multiple charging inputs are available, for instance, both a mains charger and solar panels, then these can be regulated for not only the correct rate of charge but also to avoid voltage spikes and overcurrent conditions.

All the load circuits are wired in separately and can be shut off individually if there is a circuit fault. Unlike a fuse which will just blow, the circuit is monitored such that if the fault clears, ie blown globe or a temporary overload is removed, then the circuit will automatically reconnect, that is there is no need to replace a fuse or turn a circuit breaker back on. If the fault persists though, the circuit will remain disconnected.

In the event of batteries becoming discharged excessively, the IBMS can be programmed for a controlled shutdown. Non-essential circuits like say a water pump and electric awning will be switched off first in favour of keeping the fridge or medical devices like a sleep apnea machine running.

If all that sounds a bit daunting, then the good news is that once the system is set up, it is quite user-friendly. Part of the BatteryPlus35 package includes a tablet that can be used to control, monitor and operate everything, including items like turning lights on and off and operating the hot water system. A Bluetooth link is used to connect the tablet with the BatteryPlus35 which means that WiFi capability is not required. The good news is that whilst the IBMS system has been set up to be monitored in a fairly simple fashion, tech heads can set everything up to suit their own desires and interest.

What the BatteryPlus35 offers is a comprehensive package that not only operates an entire 12V Recreational Vehicle system at its peak efficiency but does so in a way that offers the most economic use of the overall system, including the all-important batteries. 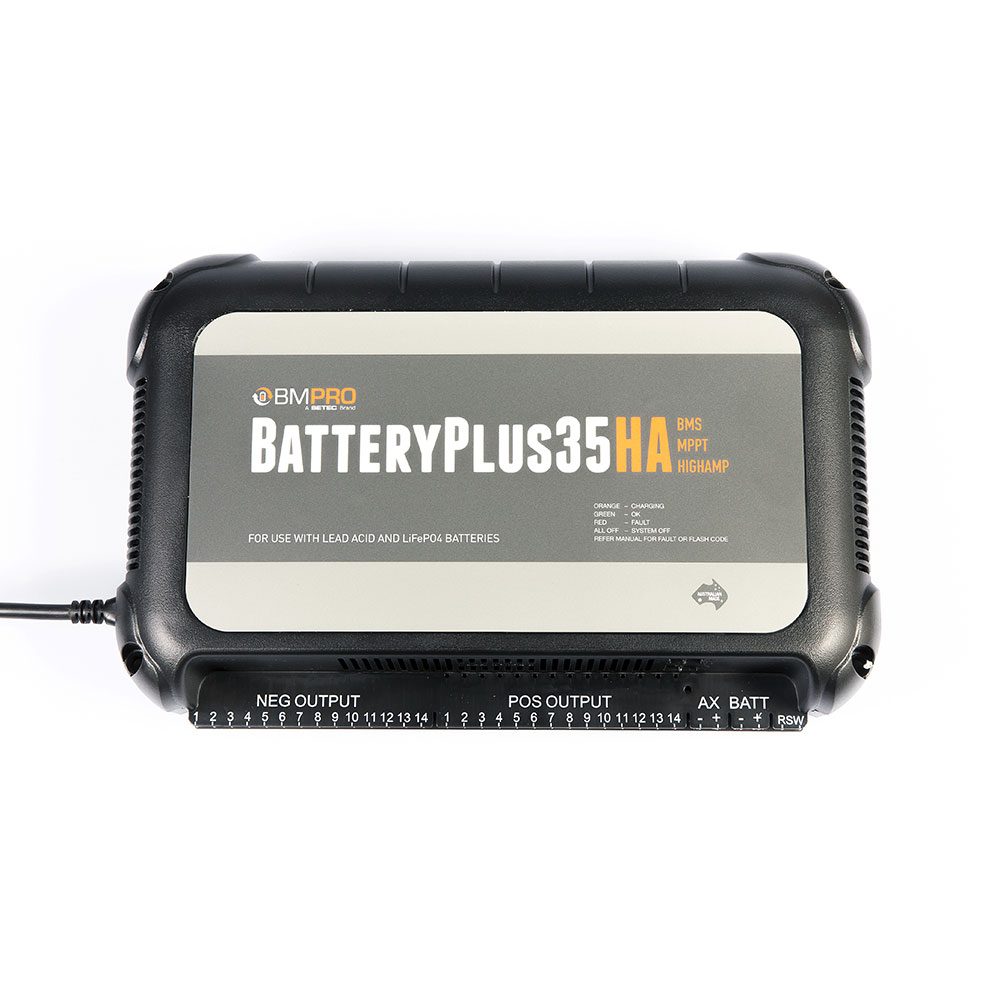